Thumpstar was established in 2004 and now trades in most western countries. We are one of the largest off-road dirt bike factories in the world and are becoming a renowned name for producing premium pit bikes, dirt bikes and trail motorbikes.

We at Thumpstar focus on the market of off road motorbikes and dirt bikes. We also manufacture 4 wheel all terrain vehicles. All our products are covered by excellent customer support with warehouses and offices in many western countries.

Our website is user friendly where parts are able to be ordered and are delivered efficiently to your door. Our aim is to provide competitive high quality motor cycling at the most affordable price possible. 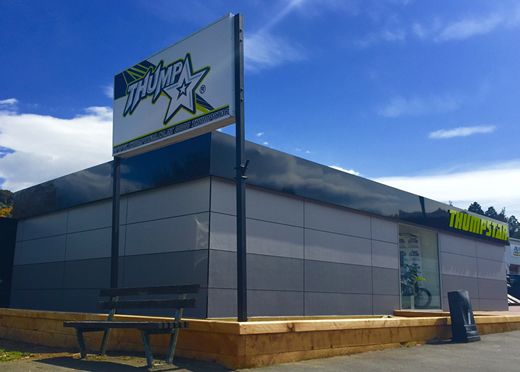 Thumpstar was founded 2004 in Australia by a racer named Timothy Hunter. While attending a Trade Fair in late 2003, he stumbled across a pit bike, felt the necessity to import it and make modifications and improvements. In April 2004 he signed a contract with a Taiwanese Company to help build these bikes. Thumpstar was born.

The first model Thumpstar released into the market, between 2004 and 2006, were the JNR 90cc, Super Hunge 110cc & Pro Hunge 125cc. The Pro Hunge 125cc was a huge success with its CNC TUV certified full billet T6 heat treated alloy frame; this frame is highly sought after to date.

Thumpstar quickly became the most well-known Pit Bike brands in the world with sales reaching over 45million dollars turnover within the first 13 months of business. Thumpstar’s success was short lived due to some shortcomings in terms of infrastructure and Trademark infringement, with other companies selling counterfeit Thumpstar.

In 2007 Thumpstar changed its name to Terra Moto and secured its Intellectual Property. New Terra Moto models were released including the Terra Moto Krusha 125cc and Terra Moto TDX 125F PRO however, unlike Thumpstar, these models did not take off and soon the manufacturer stopped producing Terra Moto.

It was in 2011 when contact was made to Hunter with the aim of reviving Thumpstar and an agreement was signed May 10th 2012 to restart the company with three new models: the TSX 88cc, TSX 125cc and TSR 160cc.

At the beginning of 2015 Thumpstar had over 16 models from 50cc to 250cc and 5 x model types including the TSB(basic), TSX(Mid-Range), TSR(Racing), TSK(Kids) and –C(Competition) designed for Kids, trail riding, Motocross and Pit Bike Racing.

Since 2013 Thumpstar has been developing junior motocross bikes and in 2015 released its TSB-C, TSX-C and TSR–C competition models to compete in motocross racing. Thumpstar has a history of racing and has been featured in world mini moto champs in Las Vegas, with top names on the Thumpstar team including Mike Brown, Dan Cartwright and Mike Leavitt to name a few.

In April 2015 Thumpstar declared Chartreuse as an official colour and is one of several off-road motorcycle manufacturers to have an original colour.

Thumpstar has sold over 40,000 motorcycles in 20 countries worldwide.